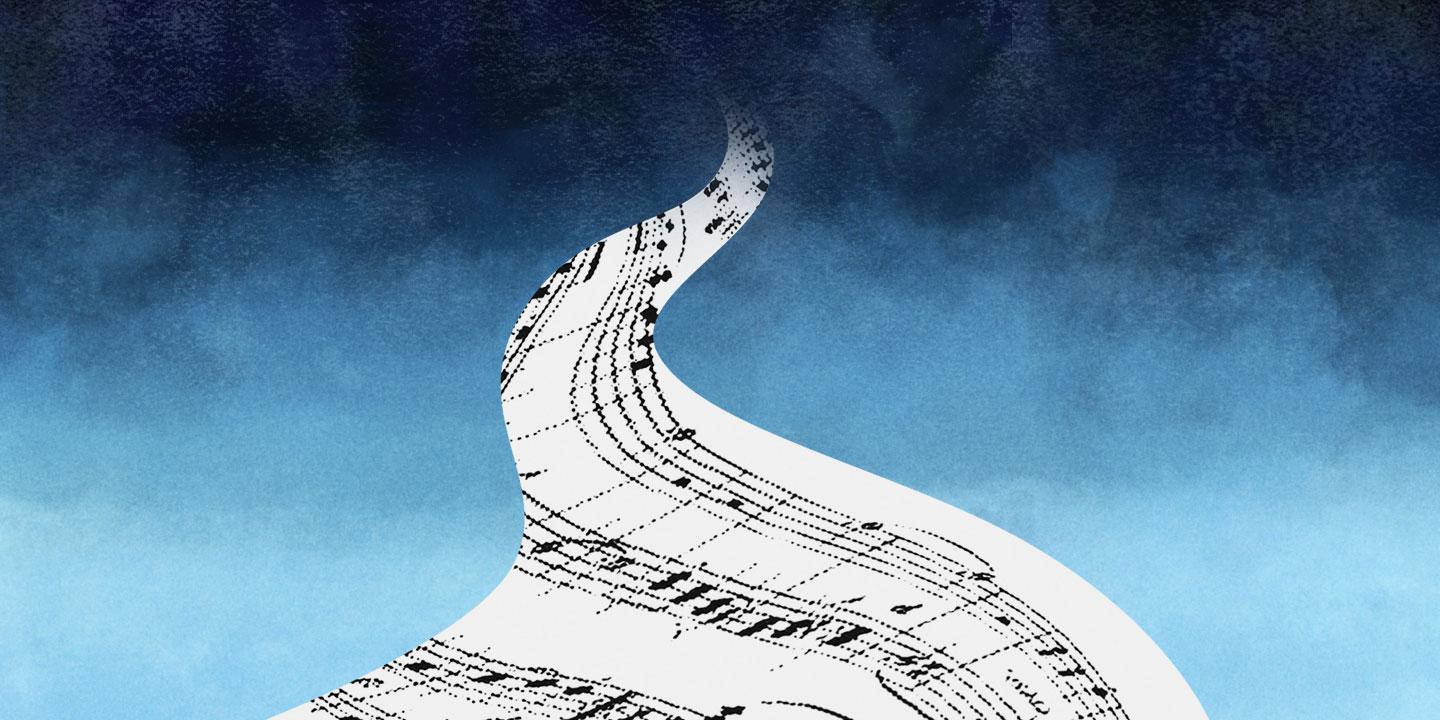 What Music Can Never Do

I played music constantly after my daughter was born. As I held her in my arms, beholding those strange, starry eyes that only stared outward, those eyes that didn’t have any of the outside world in them, at least not yet, I kept up a constant, low-level burble of music. I played things I liked, of course, but the choice of music wasn’t the point. The point was to soothe her, to provide her with an atmosphere that was as rich and full and welcome as possible. She was new to the physical world, and I could sense her discomfort with her body now that she no longer floated free of gravity, now that she could fall. When she was startled, her hands splayed out instinctively and her fingers curled, like a tumbling baby monkey grabbing at a tree branch. 카지노사이트

The music was of a piece with my rising and falling breath, with the lowered lights, with the incessant rocking to relieve the pressure on her digestive system, with the milk entering her mouth through her mother’s breast. All of it was meant to telegraph some sort of message to her, to tell her brain stem what home felt, smelled, and sounded like. Neil Young, Raffi, Daft Punk’s “Get Lucky,” Mozart String Trios, Bert and Ernie, whatever. I just had to fill her senses. Anything would do.

In the back of my mind, I thought about how she would one day remember this music, having grown up with it before she was even conscious of its existence. I imagined her filling in her own story, telling herself what this music in her life meant. Take a listen to all of this, Greta, I thought. This is everything your daddy consoled himself with when you were not here. When you hear this music, whatever else you may make of it, you will know that you are home.

I also sang to her, more or less constantly, as errant songs I had liked as a little kid came floating back into my consciousness: I hadn’t thought about Smokey Robinson’s “You Really Got a Hold On Me” in a long while, but it took possession of me, and I rocked and swung my hips awkwardly while holding Greta in front of the window, singing it to her. Imagine a gooey-eyed father tenderly singing “I don’t like you/But I love you” to his gurgling infant; that was me. 안전한카지노사이트

When Greta died, suddenly and violently, from an accident, at the age of 2, all music became hallucinatory, absurd, obscene, pointless. It would have angered me if I’d had the energy to muster anger for something so insignificant. The idea of recorded music irritated me most of all—why, exactly, did humans pipe dead sounds into our bodies, our ears plugged, more or less alone, instead of spending every possible second in each other’s corporeal presence? The activity of listening to music itself came to seem a little freakish to me, some kind of evolutionary hiccup that had somehow afflicted the entire race.

In the weeks after Greta’s death, I was in deep shock and acute trauma. My nerves were coruscated, my senses misfiring. I was unaccountably starving all the time, and my eyesight felt altogether too keen. While standing on the sidewalk I imagined I could see every vein in every leaf on the tops of trees. The world was too harsh, too vivid, and suddenly I felt a pressing need to examine it with an intensity that I’d never bothered with before.

Perhaps this instinct arose from the circumstances of her death—a plummeting piece of windowsill, breaking loose with no warning, from eight stories above her while she was visiting her grandmother. The incident felt so freakish as to seem a pointed message from the universe: My 2-year-old, the unknowing repository for all my hopes and dreams, and the container of what would have one day been her own, was simply dashed out of the world. I had a hard time not concluding that she had been specifically chosen and killed.

How could I, then, block out my environment with headphones? I needed to see and feel as much of it as I could, as if, by some confused formulation, my own lack of vigilance had led to Greta’s accident. The world sent terrible things down from the sky, things that could end us: How had I not known this before, and what might I have to learn to survive in this newly hostile world?

As I wandered, stunned, through these early days, I learned something about music that I had never known, despite having spent my career as a music journalist. Yes, music could be life-affirming, a conduit to your deepest emotions. It could also simply be noise, a horse blanket blotting out sensation. In my grief, I became acutely aware of the difference. The idea of being locked inside my own head, listening to my own thoughts echo and loop back on themselves, felt repulsive. Was I mostly using music to commune with something transcendent, or was I mostly using it to hide? 카지노사이트 추천

One song, in particular, followed me around, like a mocking ghost. I had loved this song for a very long time before Greta was born, and I began singing it to her the minute she emerged from her mother. It is a dark song, but only if you pay attention to the words; its melody is soft and loping, and I whispered a modified version of it to Greta every night, her head on my shoulder, as she gradually grew heavier and allowed herself to surrender to unconsciousness. When she was ready, truly ready, to be laid down in the crib, I could feel a subtle shift—her joints would loosen, her muscles softening. She became pliable, and as I would lean her over her mattress, her head would drop back and her legs would curl, like an itinerant aircraft docking at a space station.

The song was Elliott Smith’s “Between the Bars.”

I chose the song because the lines “I’ll kiss you again/Between the bars” suggested a kiss through a crib as easily as they suggested two lovers separated by a jail cell, or drunkards pausing in their pub crawl. I thought of its final image—“People you’ve been before/That you don’t want around anymore/That push and shove and won’t bend to your will/I’ll keep them still”—as a promise I made to her that only I understood the meaning of: Whoever you want to become, I am only here to clear your path.

I strategically rewrote some words in our version—“stay up all night” became “sleep through the night”—but there is an unchanged lyric that haunts me now: “The potential you’ll be/That you’ll never see.” When I sat in her bedroom, five days after her death, on the floor in front of her empty crib, they struck me as dreadful words to sing to a child, a curse laid on a life full of promise.

Now, the song felt like a broken-off lullaby. Its recipient had disappeared, and it served no purpose. I didn’t want to play it for myself any more than I wanted to read her books out loud, or set a place for her at the table. At some point in her short life, “Between the Bars” became a song that only existed in the space between my mouth and her ears. When her little ears disappeared, so did my desire for the song.

There were a few moments that pierced the ice. Ten days after Greta died, I found myself, shaky and raw, at a small concert. I was surrounded by friends. They formed a protective circle; those who wanted to approach me to tell me how sorry they were had to pass through this curtain of people that had drawn itself around me.

Mitski was the headliner, and I stared at her, in the throwing-off-sparks stage of her early stardom, playing “Townie,” which was then her signature anthem: “I don’t want to be what my daddy wants me to be/I’m gonna be what my body wants me to be,” she sang. In that moment, broken in every possible place, bereft, and freshly grieving, I felt exhilarated. This—this—was what music could do.

My coworker Jenn had booked the show, and as I stared past the back of her head, I realized that Greta would never have a profound moment of self-expression like Mitski’s or live a life like Jenn’s, full of art and possibility. Yet even in my sadness, I was grateful for this flash of insight and for the profound connection.

I have tried to hold onto this message, now that Greta has been gone for four years. Over time, my brain rebuilt itself, and at some point in the slow grieving process that followed, the two wires that touched together to ignite casual music enjoyment found each other again. I began to play music for pure enjoyment, just as I slowly stopped scanning my environment for “clues” as to what had happened, and how. But the larger lesson never left me: There are things that music can’t do. It was one of countless lessons my daughter taught me, while she was alive and afterward.

I try to teach my son Harrison, now 2-and-a-half, to love music for how it makes us do silly dances together. Once again, I don’t care what the music is, so long as it brings us joy and makes us laugh together—Billy Joel’s “Uptown Girl,” “Baby Shark” 10 times in a row, whatever. The music is only here to provide us with small, simple opportunities to not be alone.

I have even played “Between the Bars” again. Now, I notice with great sadness and a small, shameful bit of relief, it is a song once more. My daughter’s tufty fuzz of hair, brushing up against my ear; the reassuring weight of her diaper through my forearm; I can still close my eyes and smell her as it plays. But it exists in the world again, whole, as do I.